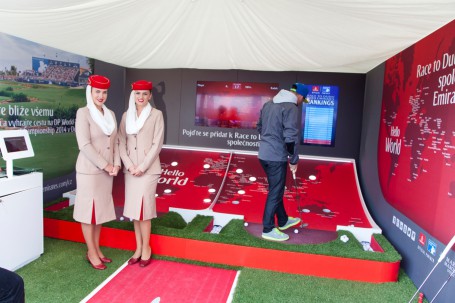 PRAGUE – 25th August 2015 – Emirates, a global connector of people and passions, will for the second time sponsor the annual D+D REAL Czech Masters, the premiere Czech golf event of the year.

The tournament will be held from 27–30 August at Albatross Golf Resort in Prague, and will once again feature the “Race to Dubai with Emirates” interactive golf competition, in which one lucky winner will win an event package to fly to Dubai for The DP World Championship.

“We are once again very proud to sponsor the annual Czech Masters golf tournament, through which we hope to encourage greater participation in this phenomenal sport. As a global sponsorship platform, golf has proven to be immensely successful for us thus far and, as with every sponsorship, we hope to deliver a meaningful experience to local golf and sports fans, and to those fans tuning in from across the world,” said Borivoj Trejbal, Emirates Area Manager for the Czech Republic.

The Race to Dubai, a major 48 tournament series on the European Tour schedule spans 27 countries across five continents and lays the groundwork to the season-ending DP World Tour Championship, bringing together the top golfers for the next three seasons – through 2017 – cementing the airline’s continued commitment to the game of golf, its fans around the globe, and bringing prestigious events to its home in Dubai.