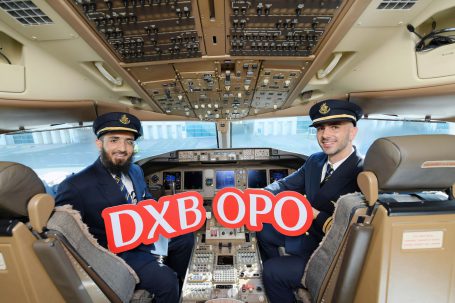 Emirates has launched its new four times weekly service to Porto, its second destination in Portugal. The new service provides travellers from across Emirates’ global network with a direct flight to the popular city in the north of the country.

The inaugural flight, EK197, touched down at the city’s international airport on Tuesday afternoon, marking the start of the airline’s first service to northern Portugal. The Emirates Boeing 777-200LR, in a two class cabin configuration featuring Emirates’ newest Business Class and Economy Class seats and interiors, was welcomed by Porto Airport with a water cannon salute. The aircraft has 38 lie flat seats in Business Class in a 2-2-2 configuration and 264 spacious seats in Economy Class. A video of the inaugural events can be found here.

Speaking at an event at the airport to celebrate the new service, Thierry Aucoc, Emirates’ Senior Vice President, Commercial Operations, Europe, Russian Federation and Latin America, said: “Travellers in northern Portugal will now have a convenient and direct flight option to our Dubai hub, from where they can seamlessly access Emirates’ global network, particularly to destinations in Africa, Asia, Australia and the Middle East. This new service also opens up a new and exciting destination for travellers from across our network.

“The allure of Porto, with its rich historic and cultural attractions, world famous Port wine production and location on the Douro River, has seen the city enjoy an increase in visitor numbers. Our new service will therefore contribute further to the economic growth of Porto and the wider Northern Region,” he added.

Also speaking at the event, José Luís Arnaut, ANA Aeroportos de Portugal, Chairman of the Board said: “Emirates’ investment in this route is the result of joint efforts between the airline, ANA as well as tourism and Northern Region stakeholder teams. We are therefore excited by this new service, as it shows the region’s development and attractiveness as both a business and leisure destination.”

Customers travelling on Emirates to and from Porto will experience the airline’s newest Business and Economy Class cabins, while enjoying the famed hospitality and service from its multinational cabin crew, including Portuguese nationals, regionally inspired meals, complimentary beverages and over 4000 channels of entertainment on ice, featuring the latest movies, music and games.

The flight will operate on Tuesdays, Thursdays, Saturdays and Sundays, and depart Dubai as EK197 at 0915hrs and arrive in Porto at 1430hrs. The return flight, EK198, will depart Porto at 1735hrs and land in Dubai at 0415hrs the next morning.

Emirates also operates two flights a day between Dubai and Lisbon with Boeing 777-300ERs, offering more than 700 seats a day.

The airline’s freight division, Emirates SkyCargo, will also offer up to 15 tons of cargo capacity per flight on the new Porto service, enabling more opportunities for local businesses to export and import goods.