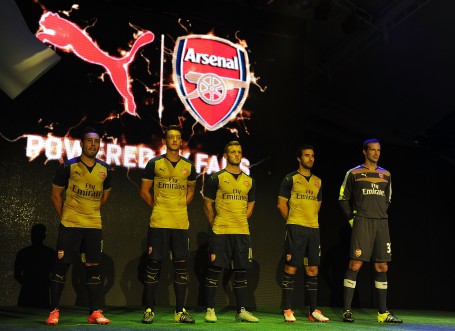 A video from the event can be viewed and embedded to your website through these links:

Olivier Giroud, Arsenal’s star striker and PUMA player said: “The event was great tonight, I was really happy to meet some of our fans from Singapore and around Asia. It’s really inspiring to see how passionate and supportive our fans are here, the atmosphere tonight was electric and it was a brilliant experience. I really like our new away kit. The gold colour is very striking and has been associated with some great Arsenal teams in the past. I’m looking forward to playing in it for the first time against the Singapore national team tomorrow night.”

Mikel Arteta, Arsenal’s first team captain and PUMA player said: “We arrived in Singapore on Monday and from the moment we touched down the fans here have been fantastic. Hearing them chant for us and feeling the amazing atmosphere from the crowd was great, it definitely motivates us to perform at our best here. I really enjoyed the event and the opportunity to show off our new away kit. It’s a great looking shirt and I like the design which is quite different to the more traditional home shirt.”

The PUMA 2015/16 Arsenal away shirt is a combination of both Arsenal and PUMA’s heritage, with a design that reinterprets a classic PUMA Football graphic combined with an Art Deco ‘A’ which is inspired by Arsenal’s past. The main body is a deep rich gold, an evolution of Arsenal’s traditional away yellow tones and it features a diamond graphic that repeats across the front and back panels. The design of the shirt has similarities with this season’s home shirt, which include PUMA’s classic Form Strip as a mesh panel on the shoulders and the dropped back panel. The neck is crew shaped with a v shaped insert and final design details include gold trimmed sleeves and underarm mesh inserts for breathability.

PUMA’s 2015/16 Arsenal campaign Powered By Fans, represents the importance of Arsenal’s fans to the club and players. The fans play a major role in the performance of the team and the campaign represents this energy and how it can motivate and energise the players.