Keep calm and drink tea: Emirates takes you on an imaginary tour of the most famous tea ceremonies around the globe 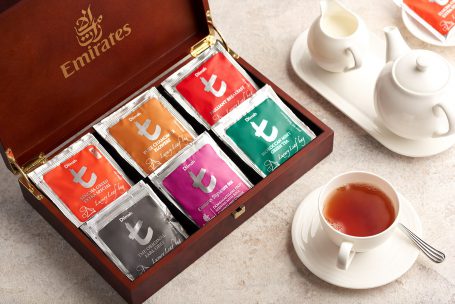 It is always tea time somewhere in the world: from refreshing mint tea, traditional green tea or delicious black tea – Emirates offers all these as part of the 12 varieties available on board and in its airport lounges, in partnership with Sri Lankan tea brand Dilmah. As the Dilmah founder Mr Merrill J. Fernando celebrates his 70th year in the tea industry and his 90th birthday this month, there’s no better time for Emirates to bring you on a tea journey around the world.

While you might not be enjoying your cup at 40,000 feet at the moment, you can still brew a cup at home and go on an imaginary tour with the most extraordinary tea ceremonies from around the globe. Discover some delicious tea varieties and the best way to drink them – maybe even throw a virtual tea party with friends and family.

Morocco: The art of pouring

In Morocco, the tea and even the pouring of it is a philosophy in itself to reach the desired, aromatic flavor. Start with a tablespoon of green tea into a typical Moroccan jug and fill it with water and boil over a gas flame. The cooked brew is poured away afterwards and a bundle of mint is added to the tea leaves remaining in the pot and filled to the brim with water. About150g of sugar per 400ml of water is added and once it has dissolved in the pot, the pouring ceremony begins. For that the host places tea glasses in a circle on a traditional silver tray and then lifts the teapot about 30 to 40 centimeters above the glasses and fills them with a thin stream of tea. He or she then pours the tea from the tea glasses back into the pot. This process is repeated up to five times, which ultimately produces a delicious foam-mixture of tea and sugar. Dilmah’s Moroccan Mint Green Tea, available on board Emirates flights, is perfectly suited to recreate an authentic Moroccan tea experience at home.

A traditional Japanese tea ceremony can last between four and six hours and is called sado or chado in Japan. Throughout the ceremony only green tea is drunk from typical, often iron pots and tea bowls without handles. Light meals like soup, rice or sake are served before the participants actually drink the tea. At the start of the ceremony the tea master silently prepares the tea by filling pulverized green tea, or matcha, into the tea bowls with a bamboo spoon and pouring hot water over it. The bowl is then first handed to the “main guest”, who drinks three small sips and then passes the bowl on to the next guest. The tea is passed on to one guest after the other and they drink from the bowl until it is emptied in silence. Afterwards a lively discussion about the type of tea used develops and ends the extraordinary ceremony. With the Dilmah Sencha Green Extra Special or Green Tea Natural varieties – also served on board of Emirates flights – you can feel like you’re participating in a traditional Japanese tea ceremony at home.

“The tea like oil, the cream like a cloud and the candy like a grindstone”: That is the rule or motto, which the East Frisians – named after the region in Lower Saxony, Germany, they live in – follow when enjoying tea. The so-called East Frisian tea is a black tea blend with melodious names like Swantje, Okka, Enne or Hajo. Just like James Bond, East Frisians do not want their tea stirred, but they drink it in three layers: Cream, tea and Kluntje (rock candy). First they place a chunk of rock candy in the cup, pour the tea over it and then finally add a little sweet cream. The teaspoon served with the tea has a purely symbolic character: Those who put their spoon into the empty tea cup signal to the host that their tea-thirst has been satisfied and that they do not want another cup.

When preparing this traditional 5 o’clock tea in England, most still follow traditional rules handed down over many generations. First of all, the host boils water in a kettle and rinses the teapot hot. The tea leaves are then placed in the pot loose or in a small cloth bag: One teaspoon of tea per cup and an additional one for the pot. Afterwards the host takes the bubbling boiling water from the fire, waits a few seconds and only then pours it over the tea. After letting the tea steep for three to five minutes, depending on the strength in flavors one would like, he or she either passes it through a sieve and back into the pot or squeezes the bag well and takes it out. The varieties Original Earl Grey and Earl Grey with Honey by Dilmah, also available on board of Emirates aircraft, help tea enthusiasts to experience an English tea hour without even leaving your own kitchen.

About Emirates’ cooperation with Dilmah

Since 1992, Emirates has been serving 12 different varieties of Dilmah tea in its lounges and on board of its flights, including a Signature tea made exclusively for the airline. Behind every blend is the passion of Dilmah’s founder, Merrill J. Fernando, who launched the brand based on two principles: producing the finest, freshest quality tea while giving back to the community. Hand-picked in the central hills of Sri Lanka, the tea leaves are withered, rolled, fermented and fired to produce Dilmah Ceylon black tea. The airline’s selection of black, oolong and green tea and natural infusions offer customers a variety of extraordinary tea experiences while traveling with Emirates.