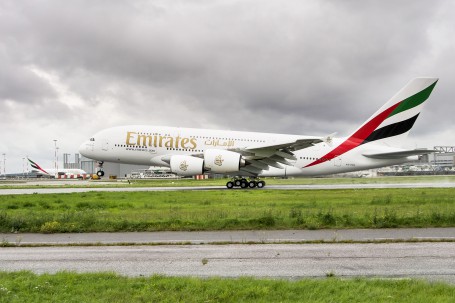 DUBAI, U.A.E, 3 September 2015: Emirates celebrated the company record arrival of four new aircraft in one day, affirming its commitment to flying a modern, efficient and comfortable fleet. The bumper delivery included two Boeing 777-300ERs, one Boeing 777 Freighter and one A380 aircraft.

Emirates is already the world’s largest operator of the Boeing 777 and the A380. The A380 aircraft delivered this week brings the total number of this iconic double-decked aircraft in the Emirates fleet to 66. The additional three Boeing aircraft marks the 150th Emirates Boeing 777 delivery milestone, and takes the current Emirates 777 fleet size to 147. Emirates received its first Boeing 777 in 1996, and has since retired three older 777 aircraft from service. With a range of up to 17,446 kilometers or 9,420 nautical miles, Emirates’ Boeing 777s serve almost 100 destinations across six continents, enabling the airline to connect almost any two points on earth.

Sir Tim Clark, President, Emirates Airline said, “The Airbus A380 and Boeing 777 are two of the most advanced, efficient, and spacious commercial aircraft in the skies today. They are the mainstay of the Emirates fleet, giving us versatility in our route planning, and also the ability to offer our customers the latest features and comforts onboard.

“Our long-standing commitments to both aircraft programmes continue to support jobs and innovation across the aerospace manufacturing supply chain around the world, particularly in the USA and Europe. And we will continue to work closely with both manufacturers to raise the bar on operational efficiency and onboard product features.”

The four new aircraft are valued at $1.5 billion and underwent pre-service maintenance checks before being put into regular service. The maiden flights for the two Boeing 777-300ERs took passengers from Dubai to Kuwait and Mumbai, while the first flight for the new A380 took off from Dubai to Dusseldorf. The Boeing 777 freighter was scheduled to fly directly from the Seattle area, where it was manufactured, to Hong Kong to pick up 103,000 kg of cargo.

Including the most recent deliveries, the total number of aircraft in the Emirates fleet stands at 238 with an average age of 6.5 years, representing one of the youngest fleets in the skies. The airline has 270 additional aircraft on order, worth a total of $129 billion at list prices. Its order book includes 46 Boeing 777-300ERs, 115 Boeing 777-9Xs, 35 Boeing 777-8Xs and 74 Airbus A380s.