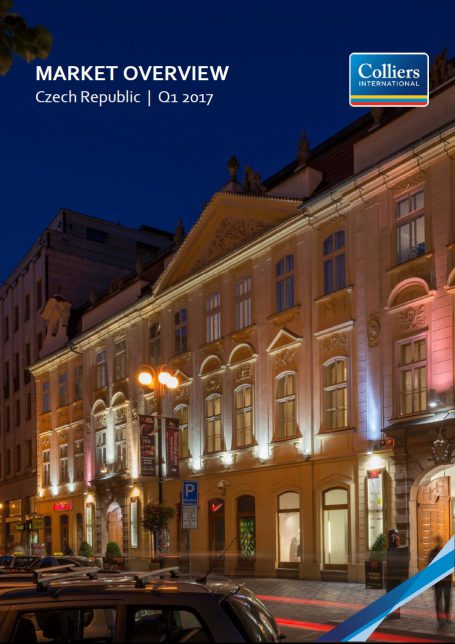 The Czech property market saw exceptionally strong investment flows into commercial real estate in the first quarter of 2017 worth EUR 1.57bn, which was almost double the transaction value compared with the same period last year, according to the Market Overview for the Czech Republic for Q1 2017, the latest research from global property advisers Colliers International.

The rise in investment flows was supported by a backdrop of strong economic performance, with GDP rising by 2.9% year on year in the quarter; moderate inflation that allowed the Czech National Bank to release its self-imposed CZK/EUR exchange rate peg of CZK27 that had been in place since 2013, which caused the Czech Koruna to marginally strengthen; high consumer confidence; and a strong jobs market.

Czech-based investors continued to cement their position as active buyers in the first quarter by making up 34% of the total deal volume, with German investors following with a 28% share. Real estate is proving popular with domestic investors, especially real estate funds backed by high net worth individuals who are often less institutional in their approach towards real estate investment than traditional fund managers.

“There are also increasing levels of interest coming from investors from geographic locations not normally associated with property investment in Czech real estate – for example from Lebanon, Thailand and Singapore,” said Andrew Thompson, Investment Director, Czech Republic at Colliers International. “Over the coming quarters, we are expecting the strong levels of investment activity to continue. There are now some further 40 transactions already in the deal pipeline.”

Prime yields remained unchanged during the first quarter, with office yields at 4.85%, shopping centre yields at 5% and industrial yields at 6.25%. Prime yields are expected to remain low due to the high levels of demand. Secondary yield compression is now more likely than prime yields, which are at cyclical lows.

The strong investment flows in the first quarter were led by several large transactions, including the largest deal which was the sale by ECE / Rockspring of their Olympia Brno Shopping Centre to Deutsche EuroShop for an undisclosed price estimated at slightly above EUR 370m, followed by the acquisition by CPI Group of the CBRE Global Investors CEE portfolio worth EUR 650m, of which some EUR 330m was made up of Czech office and retail assets.

The two largest transactions go some way to explaining why the retail sector ended up as the most popular asset class in the first quarter by total investment volume with a 63% share.

In the office segment, by the end of the first quarter the total office stock in Prague had reached
3.24 million square metres, with 343,000 square metres of offices under construction, of which 42% are planned for completion in 2017 and 52% in 2018.

The low levels of completion – in the first quarter only one property was completed, namely Dock In Two in Prague 8 with 6,900 square metres – again contributed to a drop in vacancy; by the quarter-end, the vacancy rate in Prague stood at 9.4%, which was 120 basis points lower than the last quarter of 2016 and below the 10% level for the first time since the fourth quarter of 2008.

Based on the current level of demand, the vacancy rate is set to continue decreasing throughout 2017 and is only expected to start to increase again sometime in 2018.

In the industrial segment, total industrial warehouse stock in the Czech Republic by the end of the first quarter had reached 6.47 million square metres.

The average vacancy rate in industrial for the Czech Republic stood at 4.76% at the end of the quarter, with Prague having the largest amount on offer at 124,500 square metres, representing a 4.9% vacancy rate, while some of the smaller regions by stock, such as Zlin or Karlovy Vary but also regions such as Usti nad Labem, had no vacancies at all.

Due to the record low vacancy rates, several larger occupier requirements (of greater than 15,000 square metres) that are seeking premises in the near future are struggling to find a suitable solution in the Czech Republic. There is a distinct chance that these companies might therefore start to look at options in other neighbouring countries.