Travelling in 2020: Despite the pandemic, Czechs did not give up on travelling and stayed loyal to their favourite destinations 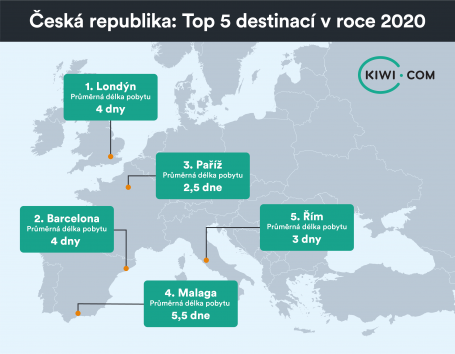 Despite a significant slowdown in tourism which was reflected in a decline in demand for air tickets, travel was still possible during the pandemic year of 2020, albeit over shorter distances. As in 2019, the most popular destinations for Czechs were London, Barcelona, ​​Paris and Rome, with Málaga completing the top five this year. All these destinations saw reductions in ticket prices by 10 to 20%.

Although Kiwi.com data shows that in 2020 around 50% fewer Czechs went on foreign trips than in the previous year, travellers still visited 127 countries and almost 700 cities, where they stayed for less than 5 days on average.

“In 63% of cases, Czechs chose virtually connected flights for their journeys – flights using multiple airlines which do not work together under normal circumstances, but which we can connect within a single travel itinerary,” said Eliška Dočkalová, Director of Customer Experience at Kiwi.com.

Interest in destinations both near and far was also indicated by the fact that Czechs performed almost 117 million searches on the Kiwi.com website last year (22 billion globally).

February saw the most bookings, while the biggest drop was in April

The highest concentration of ticket reservations was seen during Valentine’s Week – just before the start of the pandemic in Europe – not just in the Czech Republic, but across the world. Less than two months later, reservations went to the opposite extreme, with the biggest decline of the year coming when the Czech Republic and the world was facing the peak of the first wave of the pandemic. And even during the year’s only two “non-pandemic” months, less than a quarter of the usual number of flight bookings were made, not only in the Czech Republic, but in the rest of Europe too.

The Balkans and South America became cheaper, while flights to Vietnam, Egypt and Morocco were more expensive

Significant drops in ticket prices were seen for flights to Ukraine, Turkey, Armenia and Romania (-30 to -35%). Even better deals were available for flights to Austria (-36%), Albania (-52%), Bosnia and Herzegovina ( -48%) and exotic Chile or Ecuador (-40%). On the other hand, flights to Croatia and popular non-European destinations became more expensive. The average price of a ticket to Morocco or Vietnam rose by 20% in 2020. Despite the pandemic, Egypt maintained its position as one of the most popular autumn holiday destinations for Czechs: despite an average 10% increase in ticket prices, even more people flew to Egypt last year than in 2019.

A desire to travel in 2021 is already being reflected in existing reservations. In addition to perennial favourite London, Czechs are looking forward to visiting warm destinations. Along with Barcelona and Málaga, reservations are also increasing for flights to Tenerife. What’s more, interest in longer-distance flights is slowly growing, although according to Kiwi.com’s reservation data flights to European destinations still make up the majority of bookings (84%). Flights to Asia currently account for 5.5% of bookings, flights to America account for 6.5%, and trips to Africa make up 4%, with a similar distribution of destinations seen for bookings made across Europe. Prices remain low for the time being: in fact, average ticket prices are currently 10% lower than in 2020.

“We believe that the arrival of the vaccine and the gradual normalisation of the situation will allow people to travel fully again, supported by the additional services and measures with which we have responded to increased demand for flexibility when booking flights,” concludes Eliška Dočkalová, who mentions last minute flight bookings as a significant customer trend.