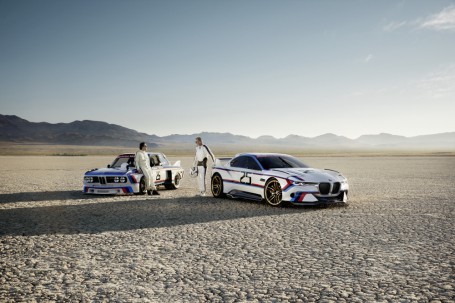 Herzogenaurach, Germany (19 August, 2015) – PUMA has joined forces with BMW to create a concept driver outfit of suit, gloves and boots for the CSL 3.0 Hommage R car that launched last weekend. PUMA’s BMW Concept race suit uses Bluetooth technology to control the connection between the car, the suit and the driver’s helmet. The LED lights on the suit illuminate when the driver’s gloves touch the steering wheel, which is a visual reference for the wireless data travelling between the car and driver outfit. The concept suit and boots also feature performance innovations PUMA ProKnit and PUMA Disc, which are new to the Motorsport category.

The vision of the race outfit was to create a forward thinking design with innovations that enhance the driving experience for the driver and improve the fit and performance of the suit. In the suit, the integration of PUMA ProKnit technology within a tubular knitted midriff panel enhances comfort. The breathable and seamless panel creates a snug fit that adapts to the drivers seated position. The concept race boots feature the PUMA Disc closure system that creates an optimised fit customised to each driver, the first inclusion of this technology within a PUMA Motorsport race shoe. The boot’s decoupled design includes a carbon fibre internal footbed and external heel counter, designed to improve pedal feel and stability.

The design of the driver outfit connects iconic elements of both PUMA and BMW. The race suit is modelled on PUMA’s classic T7 track jacket, with the iconic T7 stripes modified to integrate the BMW M Stripe and LED lights. The suit features a custom quilting design inspired by the architecture of the BMW Welt building and the quilting on the CSL seats. Twin zips are used for enhanced driver comfort, ensuring better contact around the harness with less bulk where the front standard zip would normally be placed. Design details on the boots include the same custom quilting design as the suit and the BMW M Stripe on the external heel.

PUMA’s Global Creative Director Torsten Hochstetter said; “We are constantly striving to innovate and develop new performance technologies and this project with BMW is a great example of what can be achieved. The CSL 3.0 Hommage R Concept Driver outfit project allowed us to explore innovations that will bring key benefits in the future. The notion of a concept car was translated to the driver outfit and allowed our innovation team to explore the limits of what can be achieved. We are working on developing the performance innovations for integration into future Motorsport performance products.”