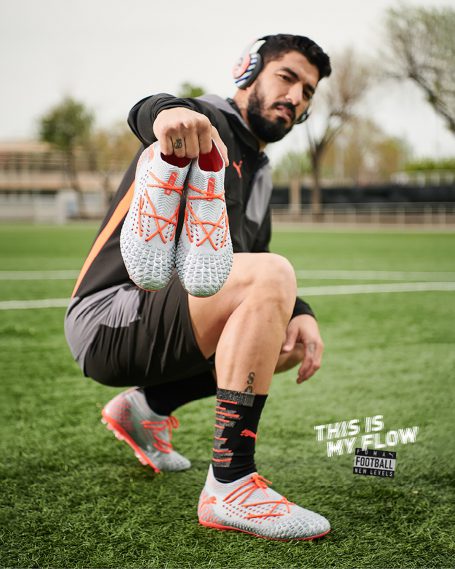 The PUMA Football Anthem Pack for FUTURE and PUMA ONE football boots celebrates “the flow”, a state of mind into which players get to bring their best game to the pitch.

To get into the flow, the world’s greatest football players are often seen listening to music before an important match. To help other players also reach this state of mind, PUMA introduces the Anthem Spotify playlist.

Assisted by French artist DJ Snake, 11 of PUMA’s top football ambassadors have created their own playlists with the songs which motivate them to push the game to new levels.

Channeling the experience of being in the flow, the PUMA FUTURE Anthem Pack boots — which will be available on PUMA.com, PUMA stores and leading football retailers on June 27 — feature a striking contrast of silver and red, while the PUMA ONE comes in a red, black and silver colorway.

To translate this motivation into victory, PUMA FUTURE uses a refined system that combines both NETFIT and the 3D Havoc Frame into one layer, we achieve bringing the foot closer to the ball for a better overall look, fit, ball reception, touch, and stability.

PUMA ONE introduces a totally new upper that combines both lightweight stability and premium touch into an aggressive and eye-catching asymmetric split design. The ultralight SPRINTWEB technology is specifically designed to provide the player with supreme lateral support and stabilization to the foot and heel, without adding any extra weight to the boot.