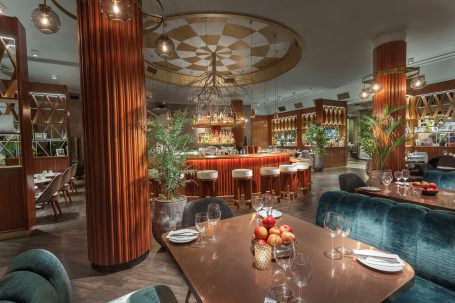 Boutique Hotel Jalta has been a landmark building in the upper part of Prague’s Wenceslas Square for exactly sixty years. Even though the building is relatively young, it is listed as a Prague cultural monument and a UNESCO Czech Heritage site. During those
60 tumultuous years, it has welcomed over 2 million guests and hosted impressive international luminaries such as His Holiness the 14th Dalai Lama and the American movie star Bruce Willis.

Designed by renowned Czechoslovakian architect Antonín Tenzer, the building was considered ahead of its time and the façade and interior stood out amongst its peers when it opened in 1958. No expense was spared, with its construction costing around 40 million crowns, making it the most expensive building in Czechoslovakia at the time.

Tenzer introduced Functionalist elements in to the design, distinct from the standard Socialist Realism that prevailed, while the marble and travertine materials for the hotel façade were chosen by the (then) Czechoslovakian president Antonín Zápotocký, who was himself a skilled stonemason.

Several famous Czech artists who had exhibited at the EXPO 58 World Exhibition in Brussels in the same year were also involved in various parts of the hotel’s design, including Stanislav Libenský, Jaroslava Brychtová, Antonín Kybal and Václav Markup.

Yalta became Tenzer’s “most personal” project. He designed and inspected its every detail. However, Tenzer did not participate in the opening ceremony on the last day of May in 1958 – as he was not invited. He himself returned to the subject later in several interviews, and spoke about the project with grace. But these days, the hotel is presented without any names of specific authors mentioned.

The hotel was equipped luxuriously at that time. In addition to the original furniture and lights, curtains, carpets and other equipment were designed for Jalta. Guests were provided with
a telephone, a radio and a TV set in the rooms (it should be noted that Czech Television started broadcasting just before the construction began and the weekly broadcast started in the year of the opening of the hotel). Heating in the ceilings was complemented with air conditioning. All rooms had their own sanitary facilities. The above-standard services included, for example, the footwear care, which was already taken into account in the hotel construction: there were small cabinets for shoes in the rooms, connected to the corridor, where the guests put their shoes and the staff could clean them and return them without disturbing the guest. Guests could also use the services of
a hairdresser or a hotel car.

At the time of start of the operation, the hotel had 164 employees. Those who communicated with the guests had to speak foreign languages. Among the employees were craftsmen, including upholsterers, locksmiths, plumbers and carpenters, shoe cleaners, five-man staff in the laundry room and waiters serving only rooms. They all had uniform clothing: chambermaids wearing black dress with a white apron and a bonnet, waiters wearing tuxedos, porters wearing dark-blue suits and other male staff wearing dark-grey suits. Furthermore, the facilities for the staff were at a high level: they had closets and washrooms with showers and were able to use a bathroom and a kitchen with a dining room.

A rare and exceptional feature is the previously concealed nuclear fallout shelter under the hotel that could accommodate 250 people. The existence of the shelter was not known to the public until 1990; today, it is home to the Cold War Museum which is open to the public. Under the previous political regime, the hotel was in the focus of the State Security (StB). There were many wiretaps leading to the hidden centre in the underground part of the building.

Today, the hotel is owned and managed by the Flow East Company, an Anglo-Czech property company which since the 1990’s has striven to protect Prague’s architectural cultural heritage and led the overall renovation of Wenceslas Square itself. Hotel Jalta was completely renovated in 2007 and has also undergone further minor refurbishments since then to achieve its present status as
a luxurious boutique hotel. It features 94 luxury guestrooms, a conference centre for up to
330 people, and the COMO restaurant & cocktail bar, which serves the best of traditional Czech, Mediterranean and Italian cuisines and sushi. The lobby exhibits one of Andy Warhol’s original screen prints of Franz Kafka.

“Boutique Hotel Jalta is exceptional not only for its unique architecture but also because of its historical significance to Prague. We are proud to have been able to return this architectural gem to its glory days when it was the height of glamour, sophistication and luxury. We have recorded a high volume of visitors from all over the world and thanks to keeping the original features while undertaking a sensitive renovation, we can provide them not only with premium comfort but also an authentic insight into history,” says Daniel Tylinger, general manager of Boutique Hotel Jalta.