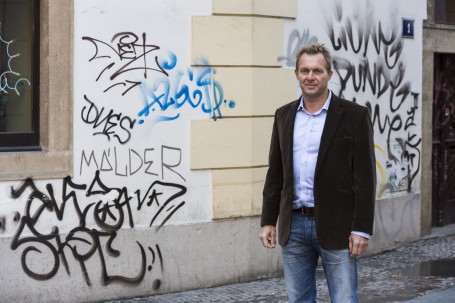 Flow East has been championing efforts across the city to remove the graffiti that plagues many beautiful buildings and structures of cultural and historical importance. The company is not only at the forefront of graffiti removal when it comes to its own buildings, but they are instrumental in mobilizing concerned municipal departments and citizens to do their part in getting rid of graffiti.

“Flow East is committed to keeping Prague beautiful and we believe an important part of that is scouring the walls that have been dirtied by the thoughtlessness of graffiti vandals,” says Flow East´s CEO James Woolf.

According to the Prague City Hall Heritage Department, the building law states every building owner must maintain their building or property to prevent it from degradation. The department has promised to increase their monitoring of graffiti affected areas and will be penalising owners who do not act promptly to remove unattractive scrawls. Flow East owns 25 historical buildings in Prague’s centre and has found that by removing graffiti within 24 hours of it appearing on a building, vandals are discouraged from returning to graffiti again.

People do mind the mess

Prague residents and visitors were asked their thoughts on the city’s graffiti via a survey conducted by Ipsos for Flow East in January 2016.  Over 80 percent of residents said that graffiti is a menace and more should be done to eradicate it, while reports from visitors also showed they were both surprised and disgusted by the amount of graffiti in the city.  There is an overwhelming demand for the municipality and police to take action against graffiti vandals. To support these efforts, Flow East conducted a ‘petition’ signing across the capital in April 2016. More than 1000 people added their signature to a statement asking Prague City Hall to truly do something to stop graffiti.

Flow East, a long term private investor, owns a portfolio of prime commercial, retail and residential properties in Prague and its surrounding areas totalling over 200,000 m2. The company has been active in the Czech Republic since 1990 and is run by James Woolf, a British citizen with Czech roots.