Emirates ushers in 2020 with positive outlook 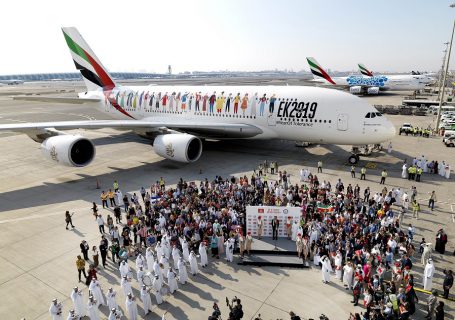 Airline closes 2019 with key product, network, and customer experience enhancements; looks ahead to Expo 2020 in Dubai, and continued strengthening of its business

Emirates, the world’s largest international airline, will conclude 2019 with a successful string of product, network, and customer experience highlights. The airline will usher in 2020 with a continued focus on strengthening its business across operational, commercial and customer experience metrics, and excitement for Expo2020 – the world’s greatest show – which will open its doors to global visitors from October.

Remarking on 2019’s milestones and highlights, Sir Tim Clark, President Emirates Airline said: “This was a year of recalibration in terms of our fleet and network plans, when it became clear that the A380 programme will cease. Emirates’ dynamic approach to capacity deployment – during the southern runway renovation at Dubai International, as well as in response to the capricious forces of politics and socio-economics throughout the year – demonstrated our agility and yielded results. We’ve also stayed focussed on delivering our “fly better” promise to customers through enhancing our product and service proposition at every touchpoint.”

Commenting on Emirates’ outlook for the year ahead, Sir Tim said: “In 2020, we’ll continue to leverage our partnerships to provide even more connectivity and value for our customers. And we look forward to welcoming the world to Dubai for Expo2020, where we will showcase the future of aviation at the Emirates Pavilion.”

Connecting the world to and through Dubai

In the 12 months since January 2019, the airline has carried close to 58 million passengers on its modern and efficient fleet of Airbus A380 and Boeing 777 aircraft. Emirates operated over 3,500 flights on average per week, or over 186,000 flights in 2019, travelling more than 885 million kilometres around the globe, which is the distance equivalent of more than 2,300 trips to the moon and back.* The airline served nearly 63 million meals on its flights departing Dubai*, and handled over 35 million pieces of baggage in Dubai* alone.

The airline reinforced its global network of 159 destinations in 2019, with the addition of three new passenger routes: Dubai to Bangkok via Phnom Penh, facilitating a new connection between Cambodia and Thailand; a non-stop service to Porto, the airline’s second destination in Portugal; and most recently, a new service to Mexico City via Barcelona.

In addition, Emirates uplifted frequencies and upgraded capacity to 12 points within its network.

Emirates and flydubai marked two years of successful partnership, carrying more than 6 million passengers on their joint networks to and through Dubai since 2017. Emirates’ passengers benefit from seamless connectivity, accessing 94 destinations on the flydubai network, while flydubai passengers can also access 143 Emirates destinations.

Emirates expanded its A380 network with the introduction of scheduled services to Riyadh, Cairo and Muscat. The Emirates A380 also operated seasonal services during the summer to Boston and Amman, offering more customers the opportunity to experience its flagship aircraft.

Strategic fleet investments for the future

At the Dubai Airshow 2019, Emirates placed an order for 50 A350-900 XWB aircraft and confirmed a full purchase agreement for 30 Boeing 787-9 aircraft. In line with its long-standing strategy to operate modern and efficiency wide-body aircraft, the airline’s latest US$ 24.8 billion investment in its future fleet will expand its operational flexibility in terms of capacity and range, and allow it to further develop its network proposition beyond 2020.

Placing customers at the heart of its business, Emirates delivered another year of trendsetting product and service initiatives to provide an unmatched travel experience in the air and on the ground. In April 2019, the airline completed its US $150 million refurbishment of 10 Boeing 777-200LR aircraft, offering a two-class cabin with wider Business Class seats in a 2-2-2 format and a fully refreshed Economy Class cabin.

Emirates’ customers continue to be spoilt for choice with over 4,500 channels on ice – the airline’s award winning inflight entertainment system, which clinched its 15th consecutive Skytrax win in 2019 for Best Inflight Entertainment as well as its 3rd consecutive APEX Passenger Choice award for Best Entertainment.

This year, Emirates elevated the inflight entertainment experience by introducing playlist synching. Customers can now browse the extensive content on offer, create personalised playlists ahead of their flight, and sync it to their seats once on board their flight, using the Emirates App. Since its launch, more than 180,000 unique playlists have been created, and the airline is expanding this function progressively across its entire fleet.

Emirates continues to invest over US$ 27 million annually to operate inflight connectivity systems, serving the expectations of modern travellers. More than 13 million Wi-Fi connections were made on-board Emirates flights in 2019, as customers increasingly expect the ability to stay connected to family and friends when they fly.

Providing a stress-free, end-to-end customer experience, Emirates launched its first remote check-in terminal outside of the airport, to provide smooth connections for cruise passengers in Dubai. These Emirates check-in counters, located at Port Rashid, allow passengers who are disembarking from their cruise ships to check in for their onward Emirates flight and enjoy a hassle-free stopover visit in the city.

Emirates launched biometric boarding and facial recognition technology at its departure gates for customers flying from Dubai to any of its 12 destinations in the U.S., reducing the time taken for identity checks to two seconds or less. More biometric technology will be rolled out in the coming year, in coordination with partners at Dubai International airport.

The Emirates App has become one of the top airline apps with nearly 2 million active users, and is available in 19 languages including Arabic, allowing users to search, book and manage their flights. The airline has also recently launched a new feature on its app called Airport Maps, allowing customers to navigate seamlessly through Dubai International Airport including check-in desks, Emirates lounges, shops, restaurants or ATMs in the airport.

Emirates Skywards, the award-winning loyalty programme for Emirates and flydubai, celebrated its 25 million member mark in 2019. The loyalty programme introduced a range of new products and services throughout the year, including Skywards Exclusives, a unique offering of carefully crafted experiences from Emirates’ expansive sponsorships portfolio. Skywards Everyday gives members the power to earn Skywards Miles anytime, every day at their favourite retail, entertainment and dining outlets across the UAE. Emirates Skywards also forged new partnerships, including with airlines such as Copa Airlines and Bangkok Airways, hotels, retailers, and banks.

In 2019, Emirates continued to support sports and culture through its extensive global sponsorships, connecting with its customers worldwide and bringing people together under a shared passion. As one of the most recognisable brands in global sports, Emirates once again activated a variety of initiatives at some of the most anticipated sporting events of the year, including the ICC Cricket World Cup 2019 and the Rugby World Cup 2019™. At home, the airline also celebrated the 50th anniversary staging of the Emirates Airline Dubai Rugby Sevens.

Marking the 48th UAE National Day and the UAE Year of Tolerance, Emirates wrapped up the year with flying colours as it broke a GUINNESS WORLD RECORDS™ for most nationalities on an aircraft. Celebrating the diversity in the UAE, the historic one-off Emirates A380 flight carried over 540 passengers from 145 nationalities. Passengers celebrated the various ethnicities, religions and cultures on-board, which is a strong reflection of Dubai’s multicultural social fabric.

*Flight figures are for the calendar year 2019