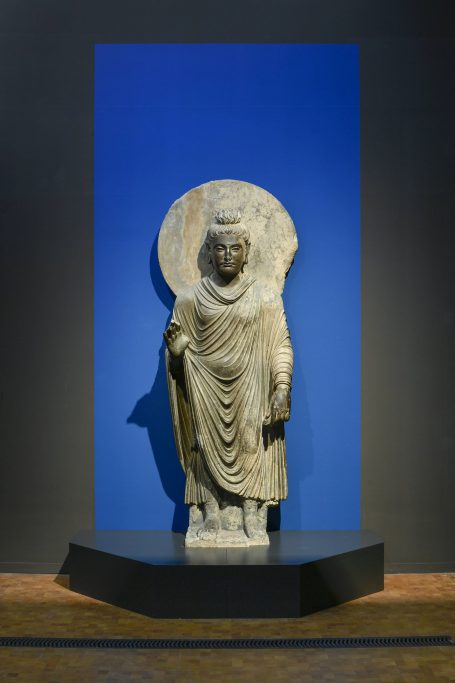 2,000 year old statue of Buddha weighing 1,700 kilograms and measuring over 2 metres in height transported by air cargo carrier for a special exhibition

Dubai, UAE, 30 April 2019– Between December 2018 and March 2019, visitors to the Museum Rietberg in Zurich, Switzerland, had the rare opportunity to come face to face with a colossal statue of Buddha more than 2,000 years old.  The statue from the Peshawar Museum in Pakistan was safely transported from its home to Zurich and back by Emirates SkyCargo.

The ancient Gandhara Buddha statue was given on special loan by the Peshawar Museum to feature in the exhibition ‘Next Stop Nirvana- Approaches to Buddhism’ at the Museum Rietberg. It was the first time that the statue had travelled outside of Pakistan. Special care had to be taken by the museums during the packing and installation process, as well as by Emirates SkyCargo during the transportation, to ensure that the monumental statue was not accidentally damaged.

Emirates SkyCargo pulled out all the stops to make sure that the statue weighing 1,700 kilograms, and reaching over 2 metres in height, was transported safely in the bellyhold of its widebody passenger aircraft through handling processes and security measures outlined under Emirates Valuable, its specialised product for transporting precious goods. However, the air cargo carrier also had to do some out of the box thinking.

“Our standard procedures mention that any precious cargo has to be transported in secure metal door containers. However, for a statue of this size, this was not really an option,” said Julius Mooney, Commercial Development Manager – Speciality Products, Emirates SkyCargo. “For us the priority was twofold, to ensure that the shipment was handled with utmost care to avoid any damage from impact and of course to ensure the security of the priceless statue. In the end we came up with the simple solution of affixing an Emirates tamper proof tape on the outer packaging of the wooden crate to make sure that we would not have any tampering of the shipment,” he added.

Emirates SkyCargo also worked with Emirates Group Security and Transguard to ensure seamless security screening, handling and clearance for the statue. During its transit at Dubai International Airport, the statue was quickly transferred on the ramp to its connecting aircraft. With detailed planning and coordination with Emirates Network Control, Emirates SkyCargo ensured that the arriving and departing aircraft were parked in close proximity so as to avoid any long transit delays. The shipment was also monitored continuously by Emirates SkyCargo’s 24*7 operational Cargo Operations Command Centre to pre-empt and avoid any potential obstacles during transportation.

Emirates SkyCargo executed the first leg of the movement from Peshawar to Zurich in December 2018 and completed the return leg from Zurich in early April 2019.

“It was a landmark shipment for Emirates SkyCargo. We are delighted that we were able to successfully transport the statue to the exhibition in Zurich. Audiences in Switzerland had an opportunity to become familiar with an important part of Pakistan’s ancient heritage and Emirates SkyCargo had a part in creating this link between the two countries,” said Jassim Saif, Emirates Vice President Cargo Commercial- West Asia and South East Asia.

“Emirates Group Security and Transguard worked closely with Emirates SkyCargo for the successful planning and the movement of this valuable statue. We have specialised and highly trained staff at Dubai and at all our stations, as well as comprehensive security protocols to ensure the safe and secure transportation of precious cargo,” said Dr Abdulla Al Hashimi, Divisional Senior Vice President, Emirates Group Security.

“Gandhara art played a significant role in the propagation of Buddhism around the world and Peshawar Museum, being the repository of the world’s richest and finest collection of Buddha statues, has a prestigious status in the eyes of art lovers. Our mission is to highlight the soft image of Pakistan throughout the world by exhibiting these masterpieces of art and the exhibition of colossal Buddha statue in Museum Rietberg Switzerland is the beginning of a new era of friendship and cooperation,” said Muhammad Asif Raza, Curator of the Peshawar Museum.

“The colossal Buddha from Peshawar – one of the absolute highlights of the exhibition – came as an ambassador of peace, tolerance and wisdom,” said Dr. Johannes Beltz, Vice Director at Museum Rietberg. “The statue pioneered for a new partnership between museums in Switzerland and Pakistan. A rewarding and worthwhile cooperation that was made possible by the great commitment of the Peshawar Museum, the Swiss Agency for Development and Cooperation and the Governments of Khyber Pakhtunkhwa and Pakistan,” he added.

“The government of Switzerland, via the Swiss Agency for Development and Cooperation, supported this initiative. It definitely strengthened the ties between Switzerland and Pakistan in an unconventional way, and we are very proud of having contributed to this special cultural exchange,” said Daniel Valenghi, Head of International Cooperation, Embassy of Switzerland in Pakistan.

Emirates SkyCargo transports a variety of precious and valuable items such as precious artwork, historical artefacts, high end consumer products such as luxury watches and jewellery on its fleet of over 270 aircraft across six continents. In 2018/ 19, the air cargo carrier moved close to 2,500 tonnes of valuable products under Emirates Valuable. The air cargo carrier has transported artwork for museums in the UAE, Russia, UK, Australia and USA amongst other countries.