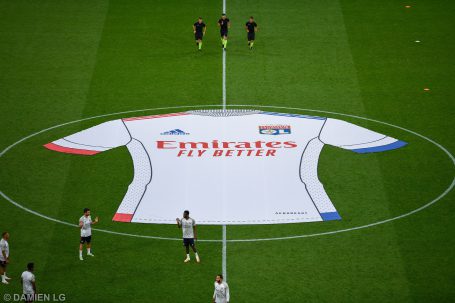 Emirates and Olympique Lyonnais (OL) revealed the club’s new jerseys for the 20/21 season during a friendly match against the Glasgow Rangers F.C. in Groupama Stadium on Thursday night as part of the Veolia Trophy.

Much awaited by Lyon fans, the 20/21 Home jersey is the first to carry Emirates’ branding, marking the start of a five-year partnership where the airline will be the Official Main Sponsors of the Olympique Lyonnais. The away jersey will be worn by the players this Saturday, 18 July during the friendly match against Celtic F.C.

Emirates’ iconic ‘Fly Better’ branding appears across the front of the OL team’s training kits and playing jerseys and will be worn during all the club’s matches, including the French Championship and UEFA Competitions until June 2025. Emirates’ ‘Fly Better’ promise connects to Olympique Lyonnais’ values of striving to achieve the highest levels of success.

It has been Emirates’ long-standing strategy to engage and connect with its customers across the world through sport. This partnership reinforces the company’s investment and economic contribution to both the Lyon region, and France as a whole. Emirates has operated flights to France since 1992, and when it launched flights to Lyon in 2012, it expand access to Southern France for international travellers across its network. Paris was amongst the first destinations that Emirates resumed passengers operations to in May, and earlier this week, the airline re-introduced its scheduled A380 services to Paris.

In addition to the Olympique Lyonnais jerseys, Emirates’ ‘Fly Better’ branding will feature on the official 20-21 season jerseys across all of Emirates football sponsorships including, AC Milan, Arsenal, Benfica and Real Madrid.