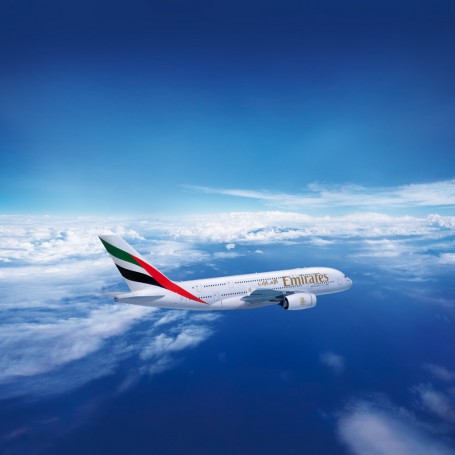 Dubai, UAE, 29 July 2015: Emirates, a global connector of people, places and economies today announced its fourth daily A380 service between Dubai and Bangkok with the up-gauge of its current services from 1 December.

The new two-class A380 service will operate daily as flight EK376 from Dubai to Bangkok and EK377 from Bangkok to Dubai. The up-gauge from its current Boeing 777-300ER aircraft will see an increase in capacity of 255 seats per flight and 3,570 seats per week to and from the Thai capital city.

Barry Brown, Emirates Divisional Senior Vice President, Commercial Operations East, said: “Thailand is an important market for Emirates, and the A380 has been extremely popular with travellers since we first started the double-decker aircraft service to Thailand in 2009.  The addition of this two-class A380 passenger service will give even more travellers the chance to experience this revolutionary aircraft first hand.

Emirates’ two-class A380 is capable of carrying 615 passengers across its business and economy cabins – accommodating 58 lie-flat seats in Business Class and 557 seats in Economy Class.

Emirates is the world’s largest operator of the spacious A380 aircraft, with 64 in the fleet and 76 on order. An industry benchmark for onboard innovation and comforts, Emirates’ A380s serve 34 global destinations of which 11 are in the Far East: Auckland, Bangkok, Beijing, Brisbane, Hong Kong, Melbourne, Perth, Seoul, Singapore, Shanghai and Sydney.

EK376 will depart Dubai at 0330hrs and arrive at Suvarnabhumi International Airport at 1235hrs the same day. This flight connects seamlessly with European and African destinations, and is especially popular with northern European travellers from the UK and Scandinavia heading to Thailand’s capital city.

The return flight, EK377, a popular flight for residents of countries in the Gulf, will depart Bangkok at 1600hrs, offering a convenient departure time that suits hotel check-out times, and arrives in Dubai the same day at 1955hrs, a flying time of 6 hours and 55 minutes.