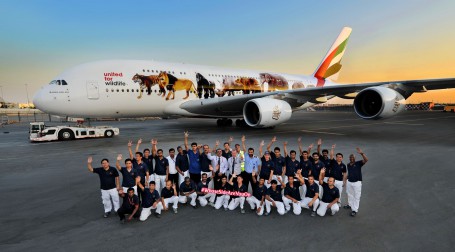 Dubai, UAE: Two massive Emirates A380 jets take to the skies this week, wearing special livery in support of United for Wildlife, a global collaboration that unites the efforts of the world’s leading wildlife charities in the fight against the illegal wildlife trade.

The Rt Hon The Lord Hague of Richmond, Chair of the United for Wildlife Transport Taskforce said: “We welcome the efforts and commitment made by Emirates airline to combat the illegal wildlife trade.  This is more than just an environmental issue. The illegal wildlife trade is now recognized as a serious and organised transnational crime. It drives corruption, is linked to money laundering and can damage economic development in many of the world’s poorest countries and communities. It will take a concerted effort, involving not only effective deterrents against poaching and smuggling, and vigilance in policing and punishing these crimes, but also efforts to increase consumer education to cut demand to protect these animals for the future. ”

Sir Tim Clark, President Emirates Airline said: “Many animals, in particular African elephants, rhinos, tigers, and pangolins, are under extreme pressure because of an unprecedented spike in the illegal wildlife trade. The world is in a global poaching crisis, and everyone has to do their part to stop this, before it is too late. Emirates believes that the global transport industry, including airlines, can play a significant role to break the supply chain of illegal wildlife trade.  And at Emirates, we are committing the resources to do our part.”

Consumers too, can contribute in a big way, by boycotting products made from the parts of these endangered animals and discouraging others from doing so.

Emirates’ two A380s will be operating flights this week. The first one departed for London (LHR) on 2nd November and a second will operate to Mauritius (MRU) on 5th November,  each wearing a different design featuring endangered wildlife. The decal on the first flight featured six endangered species, while the second flight will feature a decal with rhinos and elephants. Both designs cover the world’s largest passenger aircraft almost from nose to tail, spreading over the wings and under-belly of the plane. Approximately 40% of the surface area of the A380 will be covered by the decal. The larger of the two designs span over 42.5 metres in length and 6.2 metres in width, and weighs 70kg. Entirely designed, produced, and applied by Emirates’ in-house staff, both of these are the largest decals the airline has put on any aircraft, to date and took a team of 28 people 2.5 days to apply the decals on one A380, or approximately 900 man hours per aircraft.

View the timelapse video of the aircraft putting on its new livery here: https://youtu.be/HZA9xVsPbpU

In addition to its two A380s literally “flying” the flag for the cause, Emirates will run regular feature stories about wildlife protection in its inflight magazines, and showcase podcast interviews, wildlife programming and feature films on its award-winning ice inflight entertainment system. This subject was the cover story in the October edition of Emirates’ Open Skies magazine, which can be read here.
http://content.emirates.com/downloads/ek/pdfs/open_skies/OpenSkiesOctober2015.pdf

The airline is also collaborating with international organisations to train and better equip its ground and cargo staff to detect and deal with illegal wildlife products in transit. As the required paperwork for movement of some wildlife products is often forged, Emirates also made the decision to ban trophy shipments.

dnata, one of the world’s largest air services provider and a member of the Emirates Group, is also raising awareness through its dnata4good initiative. dnata4good has already been working with local charity organisations and authorities to save the Rhinos in South Africa. dnata4good has already funded an emergency response vehicle which treats poached rhinos in the field and have played a major part in educating local children on the dangers of poaching. In addition to this, they have also supported the first rhino orphanage and rehabilitation facility which is now fully operational in Hoedspruit.

·    Around 30,000 African elephants are killed by poachers each year.  Central Africa is worst hit with a poaching rate twice the continental average. Left unaddressed, poaching could cause the extinction of elephants in Central Africa.

·    The pangolin is the world’s most-trafficked mammal. Over a million pangolins are estimated to have been poached in the last ten years.

·    Park rangers are often ill equipped and inexperienced to tackle armed and ruthless poachers. Poaching syndicates have changed the way they operate and are now using sophisticated weaponry and equipment to increase their activities and avoid detection (helicopters, veterinary drugs, night vision equipment).  1,000 rangers are estimated to have been killed in ten years while protecting wildlife.

About Emirates
Founded in 1985, Emirates is a global connector of people and places. Based in Dubai, the airline’s global network serves 147 destinations in 79 countries across six continents. Its luxurious amenities, regionally inspired gourmet cuisine, award-winning in-flight entertainment system – ice – and unmatched hospitality provided by its iconic multilingual Cabin Crew have made Emirates one of the world’s most recognized airline brands.

About United for Wildlife

With the support of The Royal Foundation, United for Wildlife hopes to bring attention to acute conservation problems, the most pressing of which, as agreed amongst the collaboration, is the rapid escalation of the illegal wildlife trade. This trade is having a devastating effect on wild populations of some of the largest and most iconic species: elephants, rhinos and tigers, plus lesser known animals such as the pangolin.

The President of Emirates Airline, Sir Tim Clark, has joined the United for Wildlife International Taskforce on the Transport of Illegal Wildlife Products which is focused on stopping the shipment of illegal wildlife products. The Taskforce is chaired by The Rt Hon The Lord Hague of Richmond, former Secretary of State for Foreign and Commonwealth Affairs. The Taskforce has brought together senior representatives of the transport industry to make practical recommendations for the reduction of trafficking of illegal wildlife products.