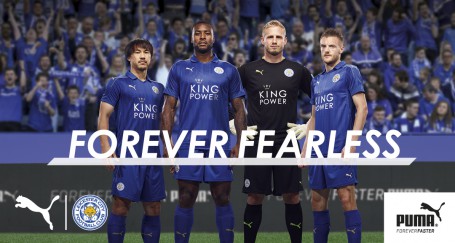 As the world looked on this week and watched sporting history and record books being written.

Now is the time.

The city of Leicester has turned blue and all spotlights, headlines and eyes of the footballing world turn to the new English Premier League Champions for the story to continue. Today, LCFC and Official kit supplier, Puma have released the new 2016/17 home kit that will now grace the hallowed turf of the King Power stadium.

For the first time in the clubs history the official LCFC home shirt will be sporting the new iconic gold Premier League embellishment only reserved for Champions and worn with pride.

The sleek contemporary style brings a bold, geometric jacquard design to the body and sleeves to create an eye catching on pitch statement, while also boasting a traditional yet stylised collar.  The textured form stripe and contrasting piping featured on the shirt and shorts gives a subtle flash of gold to showcase the club’s Champion status giving players and fans alike a look to be proud of.

The 16/17 campaign draws on the ‘Foxes’ fearless attitude that has delivered great success for the club in the past three seasons. Now is the time for LCFC to show the world the fearless philosophy we live by.

The club knew it, the fans know it, and the players have proved it and the world has just witnessed it. From Championship title winners and promotion to the Premier League. To our 14/15 season fight for survival, to today winning the biggest league in world football.

We were fearless then, fearless now and will forever be fearless – No matter what changes, nothing changes – We are Leicester City Football Club.

No matter the occasion,

The stage or fanfare

We do not falter.

As underdogs. As top dogs.

To eye this next horizon

This new world, is our new stage.

From the terrace. To the pitch.

To the boardroom. We play our part.

Because when all is said and all is done

And history hangs in the balance

Leicester City midfielder, Andy King said of the new kit: “Again, PUMA have created a kit which looks fantastic. The piping on the front and back which offers hints of gold looks great and will help us stand out on the pitch.

Paul Spencer, General Manager PUMA UKIB said “We’re delighted to continue our strong partnership with the English Premier League Champions in launching the Leicester City PUMA home kit for the 2016-17 season.   As well as writing one of the greatest stories in the history of sport, Leicester City are a fantastic football club with rich heritage and incredible fans.  It’s a privilege to continue to work with the club in our role as official kit supplier.  We look forward to many more fearless moments next season.”