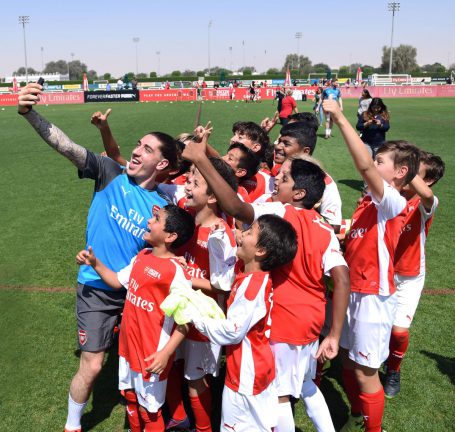 The players used Friday’s practice to train students how to ‘play the Arsenal way,’ then taking to the pitch themselves to play matches at 7he Sevens ground, home of the ASSD. This was followed by a surprise cake cutting to celebrate Héctor Bellerín’s birthday. The lucky students were then treated to an exclusive meet & greet and received some top tips on what it takes to become a professional football player. The visit concluded term two of the ASSD programme on a high note and set the stage for an exciting third term.

Arsenal Soccer Schools Dubai kicked off in 2009 as a joint venture between Emirates and Arsenal, and is open to boys and girls of all ages and abilities. Since then, more than 2000 children have passed through the doors at this prestigious school. A number of First Team players have visited ASSD to train students and attended exclusive meet and greet sessions, with recent visits by Mesut Ozil (May 2016), Nacho Monreal and Danny Welbeck (2015). The Arsenal Soccer Schools Dubai training programme is also designed to help aspiring young footballers develop and sharpen their skills on the pitch, ensuring they have a strong platform and support system to reach their sporting potential. Competitive matches are regularly held against opposing teams to expose the students to different styles of football and development squads are selected to help to raise the standard of play. ASSD is permanently based at 7he Sevens and is led by ex-Arsenal midfielder, Head Coach Ian Selley.

On-line registration for the third term will is now open and the programme will run for twelve consecutive weeks, commencing Monday 2nd April 2018.