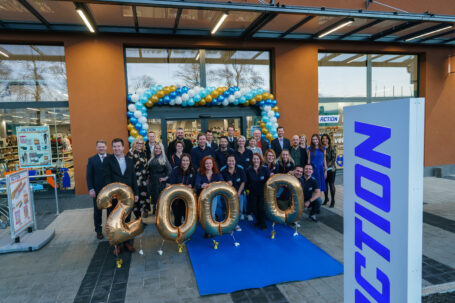 Action, the fastest growing non-food discounter in Europe, passes the 2000th store mark with the opening of the new store in Prague. The new store continues the Dutch company’s impressive growth throughout Europe and in the Czech Republic, after entering the country in August 2020. The company’s 2,000th store is also its third in the Czech capital.

Action in the Czech Republic

The Czech Republic is one of nine European countries in which Action operates across Europe. The company’s business model brings an exciting shopping experience to customers, with a constantly changing assortment of products across 14 separate categories, a high proportion of which are available for under €1 (CZK 25).

‘’We highly appreciate the warm welcome in the Czech Republic. Starting the year with this amazing milestone marks a major achievement for the more than 65,000 Action employees, now working across Europe, including in the 2,000 stores. On that base we will further accelerate our international growth in the years to come to serve millions of customers across Europe.” says Hajir Hajji, CEO of Action.

A major business partner for the Czech Republic

Action’s rapid expansion in the Czech Republic has already made it an important business partner for the country. Action focuses on providing local employment opportunities providing strong career prospects for employees, while investing in new stores.

“We welcome the chance to get to know the concept and product range of Action, a company until now unknown in our city district although it has already gained popularity among millions of customers all over Europe. In view of other future developments, I am sure that Action will find loyal customers here too. It’s a great pleasure for the Prague 19 municipality that Action will join companies contributing to a better quality of life in Kbely at the renovated former factory PAL,” said Ivana Šestáková, vice-mayor of Prague-Kbely.

The company’s growth plan for the coming year is set to create even more local jobs, according to General Manager for the Czech Republic Petr Juliš. “With the opening of this store in Prague, we have now created jobs and self-starting teams for a total of 500 Czech colleagues. By the end of 2022, we expect to have welcomed a total of 1000 colleagues, with passion for retail and love to work for a fast growing successful company in the Czech Republic alone,” he said.

Action started almost 30 years ago with one small discount store in Enkhuizen, the Netherlands. Ever since, Action has been expanding from country to country, from city to city and will continue to do so. Action is now active in 9 countries offering an ever changing variety of 6000 products to 11 million customers every week. Additionally 8 million customers visit the Action.com website. Spain will be the 10th European country where Action will be opening stores and servicing its customers.

Action’s continuously improves the quality and sustainability, not only of its products, but also of its stores. All Action stores will operate on 100% renewable energy by the end of 2024, and will by then have ceased using natural gas in its stores.

Action will issue an update on its sustainability ambitions early 2022.

The secret of success

Action offers a continuously changing assortment at small prices, focused on a range of 14 different categories, which allows us it to buy large volumes. The categories are designed to cover the key areas of our customers’ interests. The limited number of articles – reduces ‘waste’ products and results in higher sales densities. In every country our Action stores offer an almost identical assortment. Our stores are mostly located just off the highstreets, but are always easy to find.